In the News – Health Care

In the News – Health Care

So what has caught my eye in these last few months? Well first of all, I have felt the Fundamental Change that Barack Obama talked about at the time of his inaugaration. It seems that in a few short months the outlook of the nation, and my outlook in particular has taken on a more Libertarian spin than before. With the likes of Chairman Pelosi and DIngy Harry with their ineptitude knowing no bounds, they have continued to barrage us with legislation that has it’s main aim to take away the freedoms that our forefathers gave to us to share with the world.

Two in particular come to mind, that being the Health Care Reform… and the lesser known Cap and Trade bill that is a part of Obama’s Power Grab Agenda. Not to mention the Porkulus Bill and the addition to our National Deficit of $1.4 TRILLION within these last few months… has gotten me to scratching my head in wonder of what the Progressive Socialist Democrat that ol’ Barry espouses, is up to?

Health Care Reform… a misnomer in actuality (should be known as Health Care Replacement) will add to our National Debt, that will ruin the free market system that still existed in Health Care to be replaced by the Red Tape Bureaucracy of the Federal Government. Sounds like a plan huh? The Government that continually overpays for toilet seats and hammers, who has run the Social Security, Post Office, Freddie Mac / Fannie Mae, Medicaid and Medicare into 7 digit losses yearly is now trying to take over a 6th of our nation’s economic strength.

The game has changed in America, and those who care are starting to wake up to that fact. I’m going to post here as often as I can articles that I come across which higlights the new rules and the changes that we face. 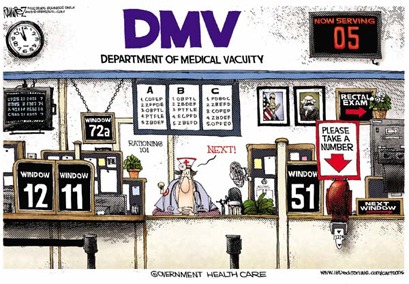