The Global Warming Nut Has Cracked!

The Global Warming Nut Has Cracked!

Who is letting this kind of drivel out? Who is the editor that is responsible to screening such crack-pottery out into the public forum?? This is rich, check this out! Some yaahooo, an AP Liberal Wiener reporter Seth Borenstien, says that the cooler temps in 2008 – the early fall cold snaps that have reached as far south as New Orleans (who hardly get any snow just a couple of days ago) – is actually a SIGN of Global Warming… Where are my steel-toed boots so I can kick this guy right up the arse!? Perhaps I will be able to knock his brain loose so he will be able to PULL IT OUT and breathe some fresh air.

Mark Twain once quipped, “Advertisements contain the only truths to be relied on in a newspaper.” How true that is 100 years later still! Here are some Highlights (and I had to look hard for these) from his poorly written, “Obama Notice Me” prose that reeks of only the desire to be published for the captions rather than being anything but truthful or set on anything of logical means.

Borenstien starts this rubbish, with a Kissing B. Hussien Obama Butt 4 paragraphs ending with, “Obama is pushing changes in the way Americans use energy, and produce greenhouse gases, as part of what will be a massive economic stimulus. He called it an opportunity “to re-power America.” (At what cost and detriment to the said Americans?)

He rounds it out with Nut Job Gore saying we need to get starting on stopping Global Warming in January – because it’s a ‘Five Alarm Fire’ (surprise surprise) – and with the discombobulated Standford University biologist Terry Root as he says, “We’re running out of time, things are going extinct.” Oh for the love of Pete! Serenity now!! Please, things are going extinct, well I guess that wouldn’t be all bad… hopefully it starts with Stanford biologists. 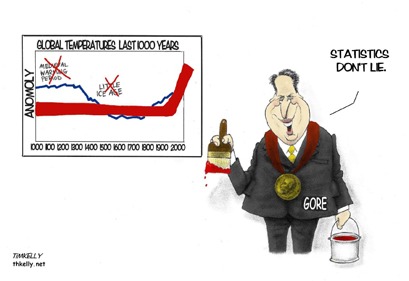 Borenstien continues, and this is rich, “In December 2009, diplomats are charged with forging a new treaty replacing the 1997 Kyoto Protocol, which set limits on greenhouse gases, and which the United States didn’t ratify. This time European officials have high expectations for the U.S. to take the lead. But many experts don’t see Congress passing a climate bill in time because of pressing economic and war issues.”

Why the high hopes? Because the whole world knows full well that B.Hussien Obama is a willing-participant sap that plans on making the mistakes of Communist Russia, Nazi Germany, Fascist Italy, and Socialist France our domestic policy! One of the reasons the USA didn’t ratify the 1997 Kyoto Protocol (beyond it being based on unverifiable hypothoses) is because it would have caused us multi-billions of dollars to conform to it and would/will put many business and full industries OUT OF BUSINESS for mere milligrams of improvements that even the hardest proponents of Global Warming have said will do little to solve the larger ‘Problem’… and China and Russia were not a part of the Fleecing of Wealth that was named the Kyoto Environmental Agreement.

Then this poor excuse for a reporter tops it off with this, “Mother Nature, of course, is oblivious to the federal government’s machinations. Ironically, 2008 is on pace to be a slightly cooler year in a steadily rising temperature trend line. Experts say it’s thanks to a La Nina weather variation. While skeptics are already using it as evidence of some kind of cooling trend, it actually illustrates how fast the world is warming.”

Of course ‘Mother Nature’ is oblivious… it’s doing what the earth does, warming and cooling to the solar flares (or lack of them) of the Sun…”Ironically”? Naturally, this numb-ninny’s diatribe is an apparent religion-like fodder for those who have ‘caught the Global Warming Spirit’

Can anyone give me a Hallalujah? … Anyone? … Don’t leave me hangin’!

How stupid are all of this wack jobs going to feel when in 4 or 5 years time their dire predictions are proven to be not even worth the spittle of ink that the AP used to print this act of repugnance upon us.

May God Help Us All… and yes even the numb-ninnies!